Delivery or Collect from Shop 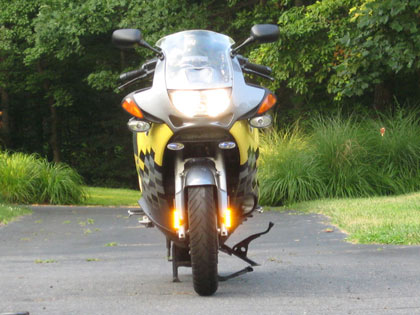 Photon Blaster: Be Smart - Be seen

The Photon Blaster is an [Read more ...]

Photon Blaster: Be Smart - Be seen

The Photon Blaster is an extremely bright, highly conspicuous lighting system designed to mount on the front forks (or elsewhere)of your motorcycle. Its brightness and unique flicker dramatically increase your motorcycle’s visibility to approaching traffic.

Many motorists find motorcycles hard to see. Not only are they much smaller than cars but their single headlight often gets lost in the background. Drivers are subconsciously looking out for other cars, and even when they see a motorcycle, it often doesn’t really register and gets ignored. It is also hard for many drivers to judge the closing speed and distance of a motorcycle as they see only a single, small point of light for reference.

The Photon Blaster is specifically designed to overcome these factors and to maximize the visibility of your motorcycle. The Photon Blaster adds two high-intensity yellow or white LED light bars on either side of your front wheel. The brilliant lights help your motorcycle stand out and the extra, distinct lights arranged in a triangular pattern with the headlight help oncoming drivers judge how far away you are and how fast you’re approaching.

Conspicuity Flicker (Protected by US Patent No. 7,928,660)
A unique, patented and extremely effective feature of the Photon Blaster is their exclusive conspicuity flicker. This dramatically increases your bike’s visibility compared to normal running lights. The flicker rate has been chosen such that it maximizes your motorcycle’s visibility, without being distracting. Utilizing a high-speed microprocessor and fast-acting, high-intensity LEDs, our conspicuity flicker takes advantage of the difference in the persistence of vision of the human eye’s central field of view compared to its peripheral view. The result is that the Photon Blaster LEDs appear to flicker when viewed out of the corner of the eye, yet when viewed directly they appear to be on continuously. The net result is that the Photon Blaster gets the attention of drivers who are not paying attention, a huge safety advantage in today’s driving environment. This is also not legal in the UK, you can program the lights to be just on and also as an indicator but not to flash except as an indicator

ALERT! feature
Our unique ALERT! feature allows you to rapidly modulate the brightness of the LEDs when you really need to be noticed.
As a motorcyclist you hope oncoming traffic sees you when you approach a busy intersection, a car paused at a crossroad ahead on a rainy day, or a long line of commuters driving toward you on your way home at dusk. With our ALERT! feature, rather than just hoping they see you, you can take action. Just tap your brakes twice within one second and the Photon Blaster’s LED modules instantly respond with a brief, but highly conspicuous flashing sequence, like 4-way flashers on overdrive. The sequence takes less than two seconds, but you’ve just greatly improved your likelihood of being seen. Normal application of the brakes or a single tap will not trigger the ALERT! sequence, so it has no effect on your usual riding style.
0.Note: the horn, high beam, or a separate pushbutton may also be used to trigger the ALERT feature.  Again, This is also not legal in the UK, you can program the lights to be just on and also as an indicator but not to flash except as an indicator, however I can see the bemifit of the Alert function especially if activated by the use of the horn, should you decide to use this function you have been warned that it is illegal to use in the UK

Turn Signal Option
The PB-TS model adds a second channel, allowing independent control of the left and right LED modules. Simply connect the extra two input wires on the controller to your bike’s turn signal wires using the included T-taps, and the Photon Blaster’s super bright amber LED modules now mimic your turn signals and 4-way flashers.
The TS controller can also power the vehicle’s existing turn signals, turning them into bright marker lights, and if these are LED turn signals, they will also inherit the conspicuity flicker of the Photon Blaster’s LED modules.
Note that the turn signal option is only available with yellow LEDs.  This is legal in the UK !

Low Power, High Brightness
Unlike high power halogen lamps, the highly efficient and incredibly bright Photon Blaster LEDs consume only 2.5 watts, less than 3% of what other auxiliary lights draw. The low current draw of the design requires no relay, and because the lights come on with the ignition, no power switch is needed.

Turn Signal Conversion The Photon Blaster-TS model can be connected to your bike’s existing turn signals, turning them into bright marker lights. If the turn signals are LEDs, it also provides them with our unique, patented, and high effective conspicuity flicker. Note: to prevent lamp-out and fast-flash errors a load resistor may be needed from the turn signal lamp to ground. For LED turn signals, see the Load Resistors link in the menu on the left of this page.

The Photon Blaster system has been designed for quick and easy installation. Instructions Click HERE

No reviews were found.